The epic story of rugby in South Africa, enshrined in the Springbok Opus, a book weighing an astonishing 36kgs, is currently a nationwide tour of South Africa.

The publication is being showcased at a number of venues across the country in the 125th year since Test rugby arrived in South Africa.

The Springbok Opus, which was produced over 48 months, includes unseen images, never-before-told stories and special photography and was commissioned to create the ultimate story of rugby at the southern tip of Africa.

The nationwide tour started at the Springbok Experience Rugby Museum in Cape Town and will make its first stop at the V&A Waterfront in the city before embarking on a national tour to take in publicly accessible events such as exhibitions and shopping centres as well as rugby occasions such as the Coca-Cola Craven Week.

The Springbok Opus tells the full and diverse story of rugby from its first arrival in South Africa in the 1860s, its popularisation among all communities and the development of separate national federations to rugby unity in 1992 and to the professional era.

But the Springbok Opus captures that history in a unique and astonishing manner. The 50cm x 50cm epic tome is filled with more than 150 000 words and hundreds of images to produce the definitive book on the history of rugby in South Africa. The Opus is hand bound in leather and is presented in a silk-covered special collector’s clam shell case.

“The Springbok Opus can hardly be described as a book,” said Craig Mark, Marketing and Sales Director: The Springbok Opus. “These works document and celebrate our rugby story and are to be enjoyed and handed down to generations as valuable family heirlooms to treasure that history.

“We have lined up a number of appearances for the Springbok Opus but we are also inviting rugby schools, clubs, stadiums, sponsors, shopping centres and other interested parties to express their interest in hosting the Springbok Opus.”

As part of the Tour, a copy of the limited Captains’ Edition – signed by 40 South African National Captains and worth R150,000 – will be offered as a part of a Tour competition as one of a number of promotions.

“This is the only Opus to be produced on a rugby team,” said Mark. “It will only ever have one edition, it really is a once-in-a-lifetime publication.”

The Springbok Opus is online at www.springbokopus.co.za and www.facebook.com/springbokopus for regular updates on events, news and new exibitions. 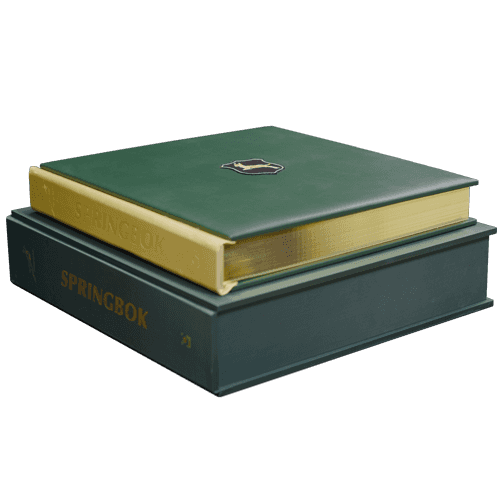 The ultimate celebration of this symbol of a nation.